About The Wicked Waffle - 100% Traditional Belgian Waffle in Cape Town

About the Wicked Waffle

Gino Adriaensen started introducing great waffles in his restaurant in Knysna, after he sold the restaurant his passion for waffles remained and he started The Wicket Waffle South Africa at the Friday market In Knysna. His parents (Walter Adriaensen and Ria Voeten) imported a old fashioned gas waffle machine out of a Bakers museum in Belgium, and after consulting with some elder Belgians and doing his own research he recreated the traditional Belgian waffle recipe originally used with old fashioned gas waffle machine. His reason for this was to show the South African public that there are a variety of waffles available and also that original traditional waffles are tastier and healthier than the store bought varieties found in South African shops.

After trading in Knysna for a year, and having built up a successful waffle business that sells wholesale to local restaurants he now wants to show the rest of South Africa how good these waffles are. Supplying these quality traditional waffles to the whole country proved to be too much of a task for one person so he has started to sell the concept as a low start-up cost franchise. Gino replicated and now supplies the original gas waffle machine so that all franchisee’s produce waffles of excellent quality.

Franchisees work from home to supply waffles both wholesale to restaurants, guest houses and private parties as well as direct to the public by selling from local markets and events. The Wicked Waffle is supplying traditional waffles to people throughout the country and empowering South Africans to build their own businesses.

History of the Waffle

We know that there are 3 different recipes of “groote wafels” in old Belgian cookbooks dating to 1634 and 1682. There is also a recipe in a German cookbook from 1582 with “dicke Waffelen” and a recipe from a French cookbook from 1653 called “des gauffres exelentes.” There is also some evidence of some sort of waffles in middle England in around 1377 "Wafer" adopted from the low German “wâfe”.

Where and when waffles originated is still a mystery, although early depictions of waffles can be seen in a 1450-1516 painting by Hieronymus Bosch and a 1559 painting by Pieter Bruegel.

The history of the Belgian Waffle starts in the middle ages. They were initially sold as unleavened crisp cakes baked in a wafer iron on an open fire. The 1st gas waffle machines appeared in around 1885 and the 1st electrical irons in about 1911.

There are now more than 20 different recipes of Belgian Waffle, the favorites being the Brussels and Liege Waffle. The Brussels Waffle went world famous at the New York World Fair of 1964 where they were unquestionably the food hit of that year's fair. Belgian Waffles had been seen in the United States before at a 1962 Seattle World Fair but the lighter mixture of the Brussels Waffle was so popular that queues formed wherever they were sold.

While not all Belgian waffles are large, square and made with a batter, the Liege waffle which was invented much later uses dough like bread dough rather than batter and has become the most popular waffle in Belgium as well as eastern countries like Thailand and Indonesia. This waffle is easier to eat in your hand and stays fresh for much longer. You can eat a Liege Waffle warm or cold, it makes a handy snack on the run... 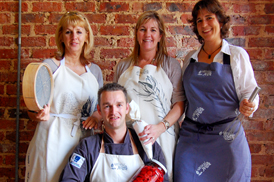 Our waffles contain absolutely no artificial colourants and/or flavourants, only wholesome natural ingredients...